With new versions of the software we use to run the forum and frontpage of the website, we are in the process of getting the site ready. In the meantime, you may experience interruptions and odd bugs over the next few months.

If you do, we ask you to please bear with us and let us know of any issues you run into as soon as possible.

Via Planes of Fame…

The annual Air Show is one of the few remaining events in Southern California where visitors from around the world can enjoy the sights and sounds of aircraft from the Golden Age of Aviation flying overhead. Each year the Air Show attracts thousands of families, aviation enthusiasts, and others who come together to witness rare and historic aircraft, as well as some of the most talented aviators take to the skies. The Planes of Fame Air Show at Chino Airport is considered one of the top five air shows in the country.

As a non-profit, 501c.3 organization, the annual Air Show serves as the primary fundraising effort for the Planes of Fame Air Museum. Revenue from the annual Air Show helps us to carry on our mission to preserve aviation history, inspire an interest in aviation, education of the public, and honor aviation pioneers and veterans. And as this year’s Air Show marks the 60th anniversary of the founding of Planes of Fame Air Museum, we have seen how our mission has impacted multiple generations of families, and is introducing aviation to entirely new generations.
For the local community, the annual Air Show provides an economic stimulus to local businesses and entrepreneurs both on and nearby the airport. For the City of Chino and the County of San Bernardino, the Air Show provides increased visibility as thousands of visitors flock to the Chino Airport for the show.

Help us save the Air Show! We are asking our friends, visitors, community, and colleagues to join together to support the Air Show. Please send us a note or letter indicating your backing of the Air Show and be sure to include your thoughts on why it needs to continue. WE NEED RESPONSES BY APRIL 4, 2017 – PLEASE ACT NOW!
Please send all comments, concerns and questions to letusfly@planesoffame.org AND
Sign Online petition at https://www.change.org/p/planes-of-fame-air-museum-don-t-let-them-stop-our-air-show

Today is APSoCal’s 10th birthday/anniversary. Just wanted to thank all of our contributors and members. There wouldn’t be an APSoCal without you all. So thank you, and here’s to another 10! 🍺

WELCOME TO THE NAF EL CENTRO AIRSHOW!
As Commanding Officer of Naval Air Facility El Centro, I welcome you to the 2016 NAF El Centro Air Show. The men and women of NAF El Centro are honored to host this open house event and hope that you enjoy the show as much as we enjoy bringing it to you. This year’s show offers a wide variety of aircraft, both military and civilian, that will thrill all aviation enthusiasts. From aerial demonstrations to static displays, we have something for everyone.

We are proud of the ongoing superb relationship we share with the surrounding communities in the Imperial Valley. This open house is one small way we have of saying “thank you” for your constant support of the base and our personnel. We are privileged to have called El Centro and the Imperial Valley home for over 70 years and we look forward to being here for a long time. Though the great weather in El Centro is a driving force in the training we do here, the OUTSTANDING COMMUNITY SUPPORT that we enjoy from the people of the Valley is the real key to our continued success. Your patriotic support, hospitality and understanding enables us to “train like we fight” and is vital to the effectiveness of our military forces in combat.

Thank you for your participation and enjoy the show!

Only close family and friends — which included some lifelong acquaintances from Torrance along with Hollywood stars — were invited to attend Louis Zamperini’s funeral Sunday at Hollywood Presbyterian Church.

But the city of Torrance, where Zamperini grew up, is now planning its own send-off for the hometown hero.

“It’s open to the public,” Torrance Mayor Frank Scotto said a few hours before he was to announce the plans at Tuesday night’s City Council meeting. “We’re encouraging everyone to come and we really hope that Torrance High School alumni will come out in force.”

The gathering is planned for 6 p.m. July 31 at Zamperini Stadium at Torrance High School, Zamperini’s alma mater. The football stadium at 2125 Lincoln Ave., near Arlington Avenue, also hosts track and field meets, which Zamperini excelled at before moving on to compete at USC and in the Olympics.

“We plan to have guest speakers there; the alumni association will be represented,” said Scotto, who attended the private funeral. “And we hope to have flyovers. We’re arranging that right now. It will be a true tribute to a local hero.”

What: Public memorial service for Louis Zamperini, who died July 3 at the age of 97

Donations: Donations can be made in Zamperini’s memory to the Victory Boys Camp in Los Angeles that Zamperini founded in 1952 to provide help for troubled youth; the family will continue to operate the camp. Checks should be made out to “Victory Boys Camp” and sent to Victory Boys Camp, 2338 Hollyridge Drive, Hollywood, CA 90068

Where to find your stuff.

Some minor changes to the menu at the APSoCal forum have been made. We have consolidated many of the user’s options and features under a new menu selection called “My Stuff…” as shown in the included picture. 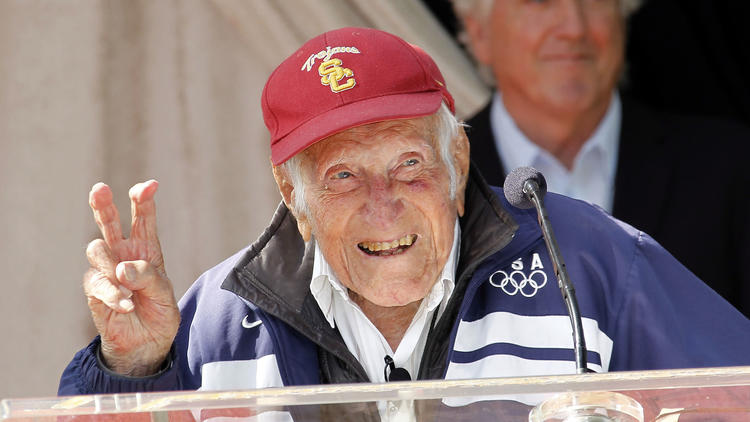 The Proud Bird, the historic LAX restaurant that has been a hangout for some of the nation’s biggest aviation pioneers, will remain open for at least another year after the owner was able to secure a temporary new lease from the Los Angeles World Airports.

John Tallichet had announced last month that the restaurant would close, after an unsuccessful two-year effort to negotiate a new long-term lease. He said he remained hopeful a last-minute deal could save the restaurant that his father, a bomber pilot during World War II, had opened.

After an outpouring of community support, Tallichet pledged to keep the Proud Bird open until late December and Thursday evening announced he had a deal with the airport to keep the property open for at least another year while he negotiated a long-term lease.

The restaurant has a collection of 20 historic aircraft and hundreds of photographs that document the long history of aerospace in Southern California.

The biggest names in aerospace have sat at the bar and restaurant here to watch the planes land on the nearby LAX runway — people such as Jimmy Doolittle, Charles Lindbergh and Neil Armstrong.

The Proud Bird has long been one of the main gathering places for the engineers, production workers and aviators of the Los Angeles aerospace industry, which is clustered around LAX. Boeing, Raytheon and Northrop Grumman all have major factories, laboratories and offices nearby.

The airport has offered some possible solutions and Tallichet said he is continuing to explore ways to reduce the expenses of a new lease. Originally, the airport wanted to boost the rent from $200,000 per year to $500,000, citing a federal law that requires it to charge market-based rent.

The new deal will cut that increase to some extent, but Tallichet said he still expects to lose money in the short term as he tries to restore his business. If he can get a long-term lease, Tallichet has said he intends to invest $1 million in upgrades to the restaurant and banquet facility.

It looks like Lockheed Martin’s Skunk Works, the legendary division that designed airplanes which represented a giant leap for their times such as the F-104, the U-2, the Blackbird family or the F-117A stealth fighter jet, has eventually revelead to AW&ST’s Guy Norris the existence of a project for an Hypersonic strike aircraft dubbed SR-72.

“After years of silence on the subject, Lockheed Martin’s Skunk Works has revealed exclusively to AW&ST details of long-running plans for what it describes as an affordable hypersonic intelligence, surveillance and reconnaissance (ISR) and strike platform that could enter development in demonstrator form as soon as 2018. Dubbed the SR-72, the twin-engine aircraft is designed for a Mach 6 cruise, around twice the speed of its forebear, and will have the optional capability to strike targets.”

AW&ST has the detailed story of the new platform, that guided by the X-51, Falcon HTV-2 and other hypersonic development programs on which U.S.’s perspective strike capability is being tailored, will be capable to hit or perform ISR of fast-moving targets, located in high-lethality areas at intercontinental ranges.

Interestingly, a Lockheed SR-72 concept image was released. The shape is coherent with the most recent hypersonic designs and it is quite similar to at least one of those published in April 2013 on LM’s Code One article about the configurations studied since the early ’60s for an SR-71 Blackbird replacement.

Above article from David Cenciotti of the Aviationist here.
AW&ST Article is here.

SAN DIEGO, Calif. – The Navy has cancelled the remaining 2013 performances of its Flight Demonstration Squadron, the Blue Angels. The squadron will continue to train to maintain flying proficiency until further notice at its home station in Pensacola, Fla.

Manage Cookie Consent
To provide the best experiences, we use technologies like cookies to store and/or access device information. Consenting to these technologies will allow us to process data such as browsing behavior or unique IDs on this site. Not consenting or withdrawing consent, may adversely affect certain features and functions.
Manage options Manage services Manage vendors Read more about these purposes
View preferences
{title} {title} {title}